Posted on August 7, 2009 by The Scottie Chronicles 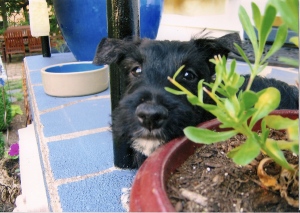 Well hello there! Funny finding you here. Well, maybe not. Presumably, you, like most other humans with exceptional taste and fine breeding, are fascinated by us Scotties. And that’s why you’ve found me and my daily dose of musings. I’d be thrilled if you’d stick around and maybe even come back to see me from time to time. Who knows what mischief and merriment you’ll find in the pages to come. You might even learn a thing or two.

First, a bit about me. As you know, the world revolves around me so it makes sense that I share a little background about my surroundings and myself so that you can fully appreciate my point of view on a variety of subjects. My point of view is above all others’ as I’m sure you can appreciate. I’m a Scottie. And that’s the way it is. (God bless Walter Cronkite. He would have said that about me, too, if he’d only met me.)

I was born. Now this is no small feat for Scottie mothers. As I understand it, it can be traumatic and difficult at times. It wasn’t just me who was born on the Ides of March. I had siblings and we were all smashed inside just dying to come out and get into things. That’s why my tail is bent. (More about my tail in a moment.)

The humans who bred my biological mother and father weren’t very good people. To even consider drop kicking me to the curb just because I didn’t meet the breed standards should have been illegal. (Kind of like that guy who tortured so many of my distant cousins. Can you believe he’s playing football again? I don’t get it. Never will. But you humans do crazy things.)

So there I was, the most precious bundle of four-footed-joy anybody had ever seen and I was about to be, well, terminated. I can say it now because it obviously didn’t happen, but it took a while to come to grips with it. To this day, She can’t talk about it.

They rescued me that day in May a few years back. Actually, I think They rescued Themselves after the loss of my distant brother-in-the-struggle, BoBo, who had lived with Them for 16 years before I came into Their lives. My AKC registered name, by the way, is BoBo’s Over The Shoulder Dream Choice, but that’s another story for another day. My call name is Stuart (of course) with a “u” and all you Scotland-philes out there can appreciate that I’m sure or at least have a good argument about Stuart with a “u” or Stuart with an “ew”.

Back to my tail and my brush with an early demise. You may not realize it, but Scotties are little (only in physical size you understand) and it’s not unusual for brothers and sisters to crowd each other before they’re born, which causes this tail-bending thing to happen. (I’m not sure if this phenomenon happens in other breeds, but then again, I don’t really care much about other breeds. Well, that’s not entirely true. I enjoy sniffing a good butt of any breed every now and again.) But not only was my tail bent, my markings included glorious patches of white hair. On my chin, on my back, on my belly, on my foot. You can see some in today’s picture. I even had a white toenail when I was a younger, like in this picture. (No doubt a “wheaten gene on steroids” as She likes to say.)

OK. Back to my tail. If those breeders had only gently uncurled my tail like a pipe cleaner, it would have straightened out. But they didn’t. They didn’t do much to help me when I was a pup. My dad peep, though, tried and tried to gently straighten out my tail, but at 10 weeks, it was too late. It straightened a little bit, but not much. Ah me.

My appearance out of the shoot did not sit well with the breeders, so they simply didn’t pay much attention to me. Actually, they ignored me. I didn’t even know how to play when I was a wee lad. Can you imagine that? I’m sure they were crushed when they realized they couldn’t get top dollar for me in the breeding world. (That’s probably when the thought of sending me over the Rainbow Bridge started. For gosh’s sake, they were going to dock my siblings’ tails because theirs were bent too!) My pedigree is quite impressive, if I do say so myself, but that doesn’t mean much for some in the dog show world if you can’t show or breed. When was the last time you saw a Scottie like me at Westminster??? You haven’t and chances are, you never will. That’s fine with me. I like my life now just fine thank you. That includes the way I look.

Godmother Carol and My Possy

OK. So my siblings and I were taken to a place to get our hair cut just after we were born and that’s where I met my Godmother. She’s actually the breeder of my father who was a true “MacTruck” of a Scottie let me tell you. Short, stocky, muscular and handsome. A real looker. Just like me.

I met Them – my beloved Peeps – at my Godmother’s house. I chose Them that very day. I knew immediately that I wanted to live with Them. Not only to get away from those nasty people, but to become a part of Their lives. They’re kind of neat. For people. Scotties are cooler, but They’re pretty neat.

I knew my life would be golden with Them. And I was right. I’m the pack leader but I let Them think They are. (That’s really nothing new in my world. I think we’re wired for that kind of reverse psychology. And I’m REAL good at it. We Scotties are perhaps the best human pack leaders in the world.) They feed me pretty well, I snooze whenever I want, and, get this, they let me play with my neighborhood girlfriends EVERY DAY. See, I have this Possy of girls that love me. They all live within a few blocks of my house. My favorites live right next door. One’s a cat that lets me chase it, one’s some kind of wolf look alike, one’s a hound of some sort and the other is a human. FOUR admirers in one place. They adore me. They feed me snacks that I don’t get at home, Aunty (the human of the group) leaves the back door open ALL THE TIME just so we can come in and go out whenever we want, and I get to howl at the mailperson as loud as I want. Actually, it’s not howling. It’s singing. The three of us canines can really carry a tune. The cat doesn’t know how to sing. Maybe I’ll try to teach it some tunes. Note to self for future musings: corral cat, teach to sing, write about it.

Boy, can I get off the subject. For a Scottie, I can really digress. And that’s unusual. Scotties are focused and intent. I’m a bit different. I tend to zig where others zag. But that’s what makes me me. As you’ll soon discover.

So my tail is still bent even though They tried to straighten it out ever so gently when They first took me home with Them. I learned how to play; though, to be honest with you, playing is really not my thing. My interests lie elsewhere. Give me a chipmunk to flush out of the rain gutter any day and give the cute little toys that make noise to those breeds without brains. (She would not be happy with me if She knew I was speaking ill of other dogs. But I can’t help it. It’s not kind and I’ll try to be more tolerant of others.) My white markings are still with me, though my white toenail is now black. I’m black AND brindle. Kind of a hodgepodge of color. But that’s what makes me Stuart. And I’m glad to meet you.

Winston welcomes you to The Scottie Chronicles - a blog that began in 2009 as a voice for Stuart, a more than memorable black, brindle and white Scottish Terrier who captured hearts around the world. Stuart passed suddenly in December 2015 from cardiac hemangiosarcoma, a nasty cancer that took him far too early. If you love Scotties, please follow along. Arroooo!
View all posts by The Scottie Chronicles →
This entry was posted in Scottie puppies, Scotties, Scottish Terriers and tagged Godmother, Possy, puppy breeders, Scottish Terriers. Bookmark the permalink.

17 Responses to The Scottie Chronicles