Posted on August 9, 2009 by The Scottie Chronicles 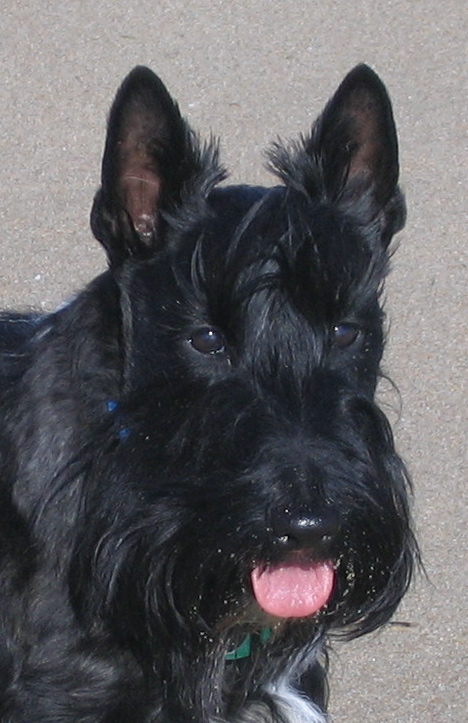 Good Lord, am I handsome. I really can’t stand myself. (I’m too sexy for my Blog!) And you’re only seeing my face! Wait until I share the rest of me with you. I think I’m about 2-1/2 years old in this picture. A stylish young lad.

Now, about my ears. When you met me, I was 10 weeks old, (see August 7) and my ears were floppy. (I love that picture by the way.) You have no idea how long or what it took for my ears to stand up. And, at one point, my Godmother told Them, “you just might have one ear up and one ear down for the rest of his life.” They didn’t care. And, after a while, my Godmother warmed up to the idea. But it was traumatic for Them. Not for me. I really couldn’t have cared less.

You see, Scottie ears are upright. That means they stand up rather than hang down. And they do that on their own. Sometimes with a little help. Some people tape them with something to prop them up. I’m told tampons work nicely for this purpose, but don’t ask me what they are. My Godmother didn’t have to use one on me. She just kept trimming the hair on my ears to lighten the load. (Something else the breeders didn’t keep track of. Along with everything else associated with me.)

I had one ear up on schedule, but the other one just hung down for a while. It was cute I’m sure, but my Godmother tried one other thing to see if it would work. She painted that liquid skin stuff on the hang-y one and what to Our wondering eyes should appear? A wonderous Scottie profile from ear to ear. Aaah success.

Now, take a look at this picture again. Perfection. In a Stuart kind of way. Oh, and that stuff in my beard? It’s beach sand. From one of my trips.

Winston welcomes you to The Scottie Chronicles - a blog that began in 2009 as a voice for Stuart, a more than memorable black, brindle and white Scottish Terrier who captured hearts around the world. Stuart passed suddenly in December 2015 from cardiac hemangiosarcoma, a nasty cancer that took him far too early. If you love Scotties, please follow along. Arroooo!
View all posts by The Scottie Chronicles →
This entry was posted in Scottish Terriers and tagged furnishings, grooming Scotties, kilts, Scotland, Scottie ears, skirts. Bookmark the permalink.

2 Responses to My Ears