Posted on January 31, 2010 by The Scottie Chronicles 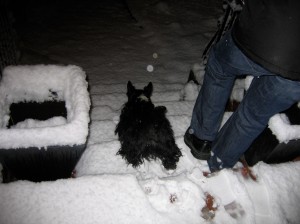 Time to go play in the white stuff!

This has been the best winter I’ve ever seen!  Well, that’s not saying much.  It’s only my fourth one.  But They say it, too. (And They’re lots older than I am, so They’ve seen lots of winters.) There’s been lots and lots of snow this winter.  I know some people don’t like it but I don’t know any Scotties who don’t like it.  Now, granted, it takes me a while to get acclimated to it.  (How’s that for a word?) But just as soon as I find a tire track or two in the road, I’m fine.  Otherwise, there’d be no place for me to walk.

My legs might be short, but boy am I strong!

Here are some more pictures of snow at my house:

From Our kitchen window. Look at all the Scottie things.

Winston welcomes you to The Scottie Chronicles - a blog that began in 2009 as a voice for Stuart, a more than memorable black, brindle and white Scottish Terrier who captured hearts around the world. Stuart passed suddenly in December 2015 from cardiac hemangiosarcoma, a nasty cancer that took him far too early. If you love Scotties, please follow along. Arroooo!
View all posts by The Scottie Chronicles →
This entry was posted in Scottish Terriers and tagged Scotties in the snow, snow, snow chemicals bad for dogs. Bookmark the permalink.