Posted on February 1, 2010 by The Scottie Chronicles 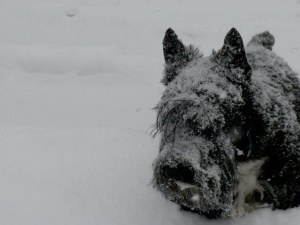 Whew.  Here’s what I looked like on Saturday afternoon.  It snowed all day and all night.

Here’s what it looked like from Our front door:

If it weren’t for the tire tracks, I wouldn’t have been able to walk!  There were lots of them in front of Our house:

And in the alley behind where Scout lives.  Here we are playing in the tire tracks:

Wheee!  See his ears just a flyin’ in the wind!  We like the snow.

Winston welcomes you to The Scottie Chronicles - a blog that began in 2009 as a voice for Stuart, a more than memorable black, brindle and white Scottish Terrier who captured hearts around the world. Stuart passed suddenly in December 2015 from cardiac hemangiosarcoma, a nasty cancer that took him far too early. If you love Scotties, please follow along. Arroooo!
View all posts by The Scottie Chronicles →
This entry was posted in Scottish Terriers and tagged Scotties in the snow. Bookmark the permalink.