Posted on February 19, 2010 by The Scottie Chronicles 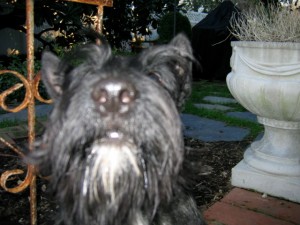 On the off chance that you’ve never seen a Scottie do a “Roo Roo,” that’s what I’m doing in this picture. We kind of put our noses up in the air and say, “rooooo rooooo, aroooo, arooooo.”

This one’s for Hamish.  My friend I’ve never met in Aberdeen, Scotland.  After years of living the good life with his Peep, Gail, he’s crossed from this life to the next one.

This one’s also for Gail.  She had to make what I’m sure is the most horrific decision a person can make.  Or maybe not, actually.  I can only imagine what I would do if I had to make the decision to help a peep leave this world in a dignified and painless way.  When you think of it that way, maybe it’s easier.  Maybe not.

She talks sometimes about when They had to make the decision to help BoBo leave this physical world.  She’s still all wrenched up about it and it was around five years ago.  He lived with Them for 16 years and then He started having bad seizures.  Dr. Elliott told Them that when the time came, They’d know it.  And that she’d help Them get through it. And she did. (But, I’m afraid She’ll never get over it.)

Dr. Elliott also told them, when BoBo had gum cancer and needed surgery, that some people just don’t take care of their dogs (or cats for that matter) the way They do.  BoBo lived another five years after his gum surgery. How about that?

Can you imagine not giving your friend all the medial care they need?  Now, I know this can be expensive, but there’s always a way. Always.

And Gail sounds like she took great care of Hamish.  In death just as she did in life.

Roo Roo to Gail and Hamish. We’ll miss him.

Winston welcomes you to The Scottie Chronicles - a blog that began in 2009 as a voice for Stuart, a more than memorable black, brindle and white Scottish Terrier who captured hearts around the world. Stuart passed suddenly in December 2015 from cardiac hemangiosarcoma, a nasty cancer that took him far too early. If you love Scotties, please follow along. Arroooo!
View all posts by The Scottie Chronicles →
This entry was posted in Scottish Terriers and tagged euthanasia, pet euthanasia. Bookmark the permalink.