Posted on June 7, 2010 by The Scottie Chronicles 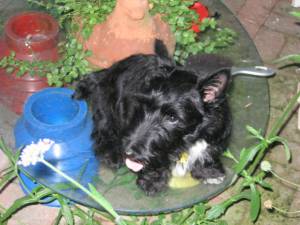 Getting brushed on a table??

There I was. Sitting on a glass-top table on Our patio. See the brush behind me? We still have that brush – four years later – but the table’s long gone.

Why on earth do you think She’d ever put me up on that table to brush me? It wasn’t like She was a new mother or anything; I was the second Scottie She’d been owned by – uh, I mean – She’d ever owned.

I still can’t believe how small I was. Compared to this:

Winston welcomes you to The Scottie Chronicles - a blog that began in 2009 as a voice for Stuart, a more than memorable black, brindle and white Scottish Terrier who captured hearts around the world. Stuart passed suddenly in December 2015 from cardiac hemangiosarcoma, a nasty cancer that took him far too early. If you love Scotties, please follow along. Arroooo!
View all posts by The Scottie Chronicles →
This entry was posted in Scottish Terriers and tagged brushing Scotties, cute Scottie picture, grooming Scotties, Scottie puppies. Bookmark the permalink.

5 Responses to A Baby Scottie Brushing