Posted on October 4, 2011 by The Scottie Chronicles

I have a confession to make.

Oh my. After all of y’all’s thoughts about having my tooth removed (OUCH!) sooner rather than later, We’re thinking about biting the big one and just doing it. Why keep a cracked tooth? Won’t it just break off later? And cause more problems down the road? She’s got a cracked tooth, though, and it’s not going anywhere. Unless She’s just waiting for it to crack in two. I’ll have to ask Her about that…

And, listen, I have a confession to make. Since I did so well over the weekend, We decided to cancel my appointment this week to have it looked at. Guess that may have been premature, not to mention stupid. (If you’re just joining Us, you can read all about my latest escapade involving my teeth here.)

OK. I’ll keep you posted on that tooth thing. And thank you for caring. I really appreciate it. From the bottom of my frog dog feet.

Look what I got thru email yesterday? This cute picture: 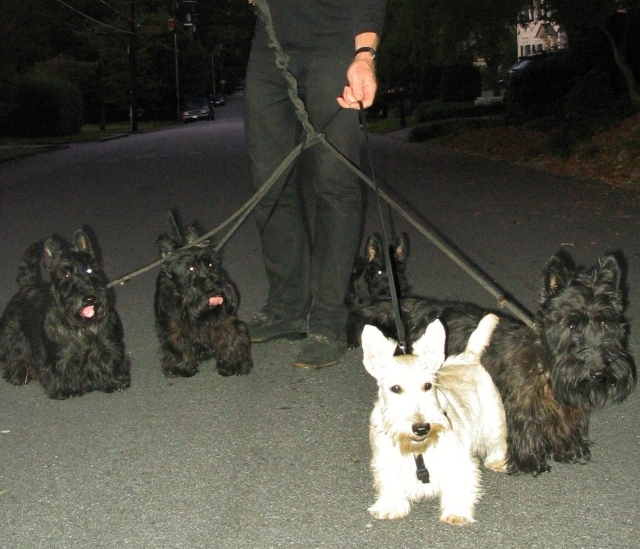 This bunch ‘o Scotties lives in North Carolina. Uh…I’m not sure where. And We don’t know who this person is, but he sure can walk well can’t he? I couldn’t imagine being walked in a pack ‘o Scotties like that. Could you?

Winston welcomes you to The Scottie Chronicles - a blog that began in 2009 as a voice for Stuart, a more than memorable black, brindle and white Scottish Terrier who captured hearts around the world. Stuart passed suddenly in December 2015 from cardiac hemangiosarcoma, a nasty cancer that took him far too early. If you love Scotties, please follow along. Arroooo!
View all posts by The Scottie Chronicles →
This entry was posted in The Scottie Chronicles and tagged a dog's dental health, companion animals, dogs, pets, Scottie pictures, Scotties. Bookmark the permalink.

12 Responses to We’ve Been Thinking