Posted on January 19, 2015 by The Scottie Chronicles

The WordPress.com stats helper monkeys prepared a 2014 annual report for me. How nice! They do this every year and I’ve never showed you one.

But, because, without you, The Scottie Chronicles would be pretty darned boring, I thought I’d share this little tidbit with you:

IS THAT THE COOLEST THING? Thank you, my friends!

Now, back to my important business for today. Snoozing. I’m really good at that. Here I am on the big bed at Keswick last fall. When the peeps took me on a nice trip where everybody knew my name. Kind of like Cheers, yes?

You remember, this little trip. 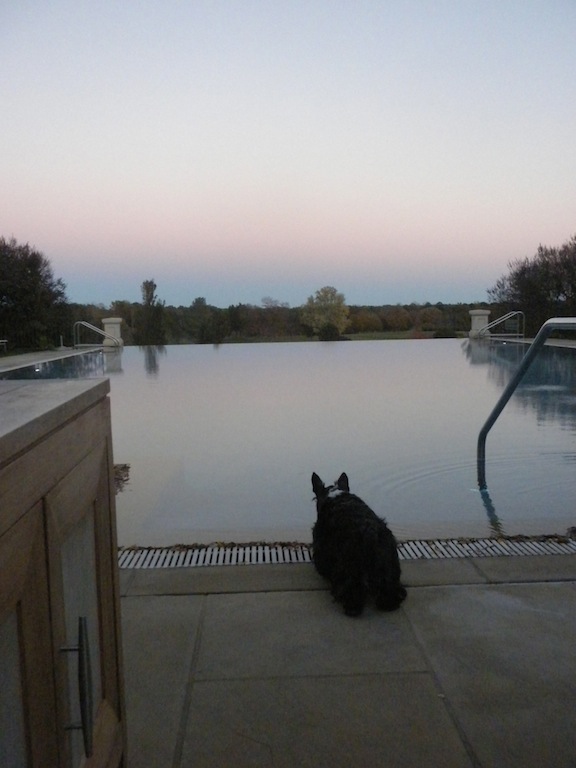 Here’s the pool that stays open 24 hours. And it’s heated.

And they have a men’s room – just for me – on one of my favorite trails. I’m such a gentleman.

And they have geese just for me to chase. Isn’t that nice?

Hey, I’ll bet I never told you about this trip. I’m so bad. But, remember, that’s one of my New Year’s ResorOOOOOtions.

OOOOOOhhhhh! And one more thing. I have absorootly no idea where I was on Saturday. But y’all gave some good guesses!

Winston welcomes you to The Scottie Chronicles - a blog that began in 2009 as a voice for Stuart, a more than memorable black, brindle and white Scottish Terrier who captured hearts around the world. Stuart passed suddenly in December 2015 from cardiac hemangiosarcoma, a nasty cancer that took him far too early. If you love Scotties, please follow along. Arroooo!
View all posts by The Scottie Chronicles →
This entry was posted in The Scottie Chronicles and tagged blogging, dogs, geese, Keswick Hall, pets, resolutions, Scotties, sleeping, swimming pools, travel, traveling with a dog, Virginia. Bookmark the permalink.