I’m on the story

Posted on July 2, 2015 by The Scottie Chronicles 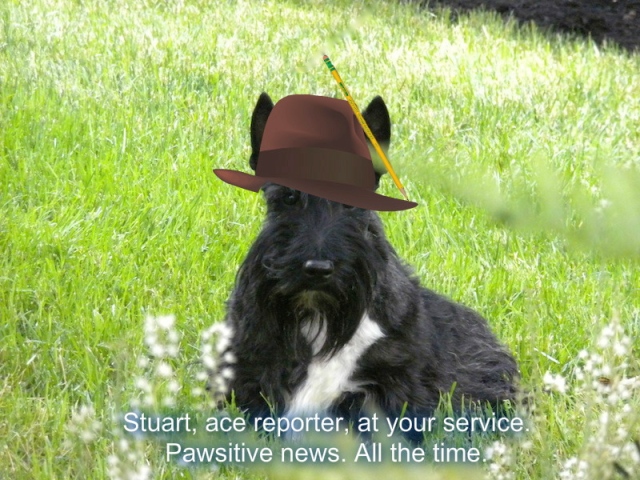 I’m all about telling it like it is. So, here I am in my new role as Editor-in-Chief/Publisher at The Scottie Chronicle’s Pawsitive News Service.

Yes. Just call me Edward R. Murrow. Or Frank McGee. Or Edwin Newman. Or, yes, Barbara Walters. (If Caitlin can do it, so can I. I think I’d look smashing in a pair of maribou mules. Make that two pair. I’ve got four feet.)

Thanks to Riley Puppy who reminded me to put a pencil behind my ear. Leave it to a Scottie to catch the details.

Thanks, too, go out to Kismet who’s the Mid-West/Southwest Bureau Chief. And to Corkscot who’s covering the Southeast. They’ll be submitting their news so I can get it out to you. Those hungry for news. Real news. Not this made up, sensationalized stuff.

If you want to climb aboard the Pawsitive News Service fleet of global reporters, just Tweet me @StuartTheScotty or send me a peemail to StuartTheScottie@hotmail.com. It must be pawsitive. Nothing negative. If it involves those with paws, all the better, but it doesn’t have to.

Now. I just got a tip that there’s a new litter of Scottie puppies just down the road a piece. I’m on it.

Winston welcomes you to The Scottie Chronicles - a blog that began in 2009 as a voice for Stuart, a more than memorable black, brindle and white Scottish Terrier who captured hearts around the world. Stuart passed suddenly in December 2015 from cardiac hemangiosarcoma, a nasty cancer that took him far too early. If you love Scotties, please follow along. Arroooo!
View all posts by The Scottie Chronicles →
This entry was posted in The Scottie Chronicles and tagged broadcast news, dogs, funny dog photos, news, newspapers, pets, photography, positive news, reporters, Scotties, Scottish Terriers. Bookmark the permalink.

23 Responses to I’m on the story