Posted on September 8, 2015 by The Scottie Chronicles 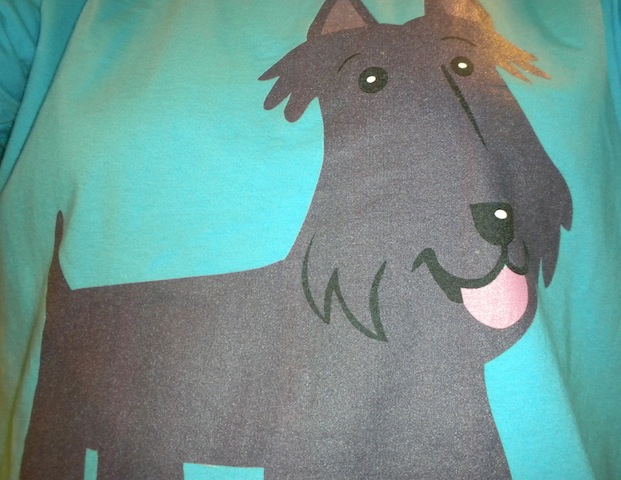 This little guy traveled around quite a bit yesterday. Notice his ears are cropped out of this photo. And I’m no where to be seen. There’s a reason for that.

Since We’re still perplexed about my grooming and stripping situation – haven’t found anybody yet – the peeps have had quite the conversations.

“So, why don’t you just learn to do it yourself?,” He says. “Just watch a You Tube video and figure it out.”

“Really? Coming from you, a professional artist, you’re suggesting that it isn’t hard and doesn’t require any type of real knowledge and expertise,” She says.

“Flattery may get you somewhere sometime, but this isn’t one of those times,” She says. “But I have to admit, his ears are getting waaay too scruffy and he can hardly see with that long hair around the inside of his beautiful eyes.”

So, you guessed it. She borrowed some rounded-end scissors from a friend with an Old English Sheepdog – wouldn’t you think those scissors would be the size of a small child? no, as it turns out, eyes are eyes no matter what size the breed – and plopped me up on the grooming table. But She does this at least once a week, so I really didn’t figure out until it was too late what it was She was doing.

Yes, my friends, the peep folded my ear together like a taco and snipped away. On both ears! THEN, She trimmed the hair from where it grows on the inside, near the nose. Gone. Poof! I can see again!

She really didn’t do such a bad job on the ears, but notice you haven’t seen a picture of moi today. And you probably won’t see any of Her handiwork.

A guy has to keep his pride in tact. Oh me.

Winston welcomes you to The Scottie Chronicles - a blog that began in 2009 as a voice for Stuart, a more than memorable black, brindle and white Scottish Terrier who captured hearts around the world. Stuart passed suddenly in December 2015 from cardiac hemangiosarcoma, a nasty cancer that took him far too early. If you love Scotties, please follow along. Arroooo!
View all posts by The Scottie Chronicles →
This entry was posted in The Scottie Chronicles and tagged canine dental health, dog grooming, Doggie Tops, dogs, friendship, humor, Scotties, Stuart. Bookmark the permalink.

14 Responses to Peep with Scissors?