Posted on March 24, 2016 by The Scottie Chronicles

“Quick. You better hurry before she gets too far away.”

“You think I should? She’ll think I’m crazy.”

Out the door I went. Chasing after a woman with a Scottie on Boulevard St. Germain.

Paris’ Latin Quarter is full of lively restaurants and that’s where we found ourselves during my blog break in February. We’d planned the trip to celebrate our Valentine’s Day wedding anniversary, but when we almost lost Stuart in November, we put those plans on the back burner. Way back.

Originally we were only going for a week or so, but when Stuart passed, and the days and nights without him grew more and more painful, we decided to extend the trip.

So, there we were. In Europe. Grieving and trying to celebrate at the same time.

Thankfully, dogs are everywhere in Europe. They make us happy. 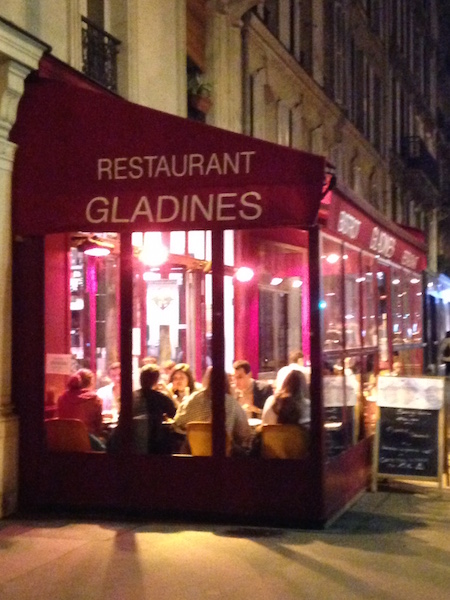 My husband was sitting where the long-haired woman on the right was seated in this photo. I was across from him when I noticed the Scottie coming right at me. How can you miss a Scottie? Even at night. That black cinder block shape with the upright tail was unmistakable.

Yes. She did think I was crazy. “Madame! Madame!” I said running after her trying to remember how to say Scottish Terrier in French. But people can communicate without words and I asked if I could pet her dog. “Uuhh…maybe not,” she stared. Somehow I managed to tell her that I’d lost my own Scottie.

She understood and eventually smiled. Then told me her girl was not well. A sick, 11-year-old Scottie. I could feel trouble in the pretty girl’s coat as I pet her and she gave me a half tail wag.

We frowned at each other and I cried.

That’s the only Scottie we saw in almost three weeks.

Winston welcomes you to The Scottie Chronicles - a blog that began in 2009 as a voice for Stuart, a more than memorable black, brindle and white Scottish Terrier who captured hearts around the world. Stuart passed suddenly in December 2015 from cardiac hemangiosarcoma, a nasty cancer that took him far too early. If you love Scotties, please follow along. Arroooo!
View all posts by The Scottie Chronicles →
This entry was posted in dogs, grief, pets, Scottie health, Scotties, Scottish Terriers, The Scottie Chronicles, travel and tagged dogs in Europe, Europe, mourning, mourning the loss of a pet, Paris, Restaurant Gladines Paris Boulevard St. Germain. Bookmark the permalink.