Posted on January 24, 2017 by The Scottie Chronicles 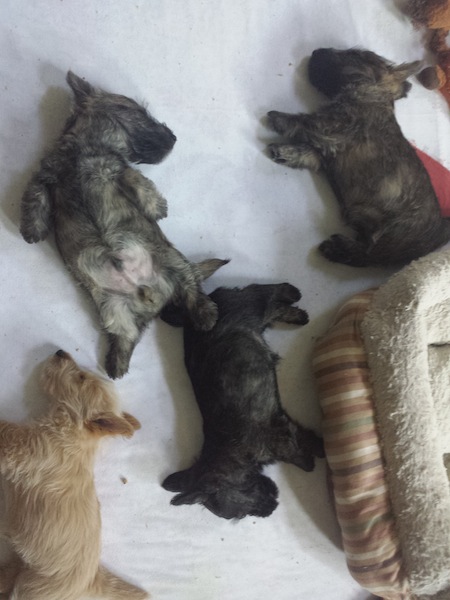 Here are Nessie and Hannah. When they were older ARROOOOOOOO! I can’t stand how cute they are. Now, they’re probably BIG dogs!

No, they’re not ours. But, I do have a friend who lost her best dog pal only a few weeks ago. Today, she’s rescuing the CUTEST stray Jack Russell (parson) terrier. Good for her!

And, next week or so, more friends are driving for a million hours to pick up a SCOTTIE puppy after losing theirs over the summer. Yippeeeeee!

AND, one of our very own blog pals is in the process of adding to her home after suffering a loss.

PUPPIES RULE!!!! No matter what kind they are. No matter how big or how small. (OK…kittehs rule, too.) Any furry, feathered or finned creature who brings us joy RULES!

Winston welcomes you to The Scottie Chronicles - a blog that began in 2009 as a voice for Stuart, a more than memorable black, brindle and white Scottish Terrier who captured hearts around the world. Stuart passed suddenly in December 2015 from cardiac hemangiosarcoma, a nasty cancer that took him far too early. If you love Scotties, please follow along. Arroooo!
View all posts by The Scottie Chronicles →
This entry was posted in dogs, friendship, pets, photos of dogs, puppies, The Scottie Chronicles. Bookmark the permalink.

8 Responses to Time for More Puppy Pick Me Ups