Posted on November 5, 2017 by The Scottie Chronicles

Six months ago, on the 5th of May, little Winston burst into the world down in North Carolina. Little did he know he was hoped for, wished for and nearly missed the chance to come to us. But Angels Stuart and BoBo made sure the Dad Peep and I would cross paths with him and RedRox Scotties. (Thank you Jill Mashburn and to you, Donna, for letting us know about this wonderful wiggly friend who is now our own. Someone else let us know about Winston, too, but we’ll save that happy story for another time.)

Cross paths we did and now we’re looking forward to our 3rd month together as a family coming up later this month. 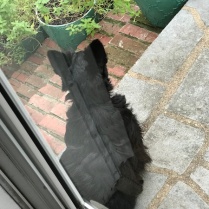 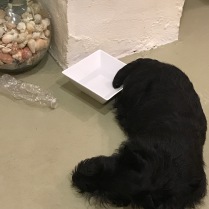 Tail in the water bowl.

And thanks to you, our blog pals. You’re the reason The Scottie Chronicles is still going strong. All of you. All of you who visit, leave comments (or not), write, email, drop by our home, and keep us in your thoughts from far and wide.

Winston welcomes you to The Scottie Chronicles - a blog that began in 2009 as a voice for Stuart, a more than memorable black, brindle and white Scottish Terrier who captured hearts around the world. Stuart passed suddenly in December 2015 from cardiac hemangiosarcoma, a nasty cancer that took him far too early. If you love Scotties, please follow along. Arroooo!
View all posts by The Scottie Chronicles →
This entry was posted in dogs, friendship, love, pets, photos of dogs, puppies, The Scottie Chronicles. Bookmark the permalink.