Off to a good start. Hopefully.

Posted on January 9, 2018 by The Scottie Chronicles

I just left the following comment on the post about Winston’s 8th Month Birthday. And it occurred to me, after reading the many insights left by commenters, that all of you might like to see it. It’s been altered only slightly.

Your wisdom is immense. I didn’t feel quite right about traveling twice for longer than a weekend when little man came into our lives back in September. But, what’s done is done and we’re a pack now. One thing’s for sure, when we traveled, he was safe and loved. We even had a choice about where he could stay while we were gone! We’re very lucky in that regard. And very, very appreciative of his caregivers led by Sherlock himself.

We’ve been together with no interruption for just over a week now since the howlidays and that tail of his goes nuts when we come back into the house from being gone for an hour or so. That’s a good sign!

We’re back to going to the Farmers’ Market every Saturday and have scheduled a class for the three of us beginning next month.

Winston is one smart cookie. And stubborn. As. A. Mule. (But what Scottie isn’t?) That’s one of the many traits I love about them.

Thanks friends and furiends, for your continued guidance down this road of ours….ArrOOOO!

I have a good feeling about 2018. And you’re all a part of that prognostication. (Doesn’t THAT sound like a word Stuart would use? Winston is soon to develop his own way with words. So stay tuned.) 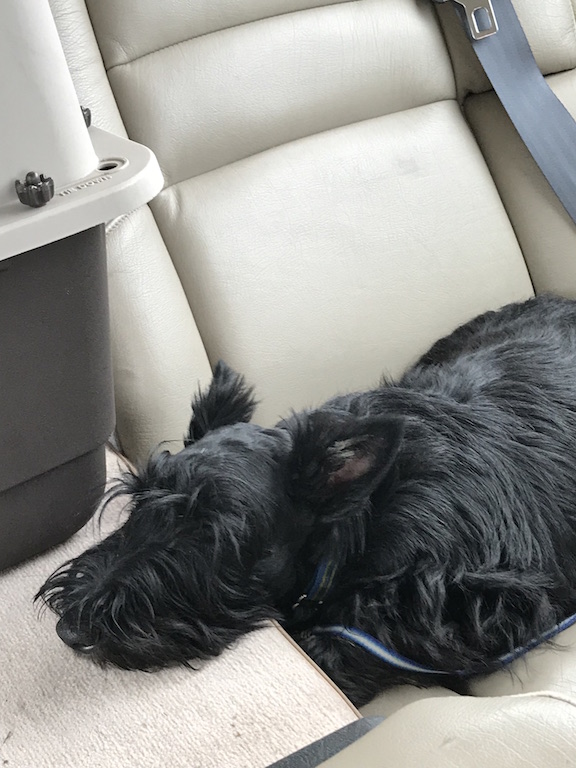 Winston welcomes you to The Scottie Chronicles - a blog that began in 2009 as a voice for Stuart, a more than memorable black, brindle and white Scottish Terrier who captured hearts around the world. Stuart passed suddenly in December 2015 from cardiac hemangiosarcoma, a nasty cancer that took him far too early. If you love Scotties, please follow along. Arroooo!
View all posts by The Scottie Chronicles →
This entry was posted in dog adventures, dog photography, dogs, friendship, love, pets, Scottie puppies, Scotties, Scottish Terriers, The Scottie Chronicles and tagged training a Scottie. Bookmark the permalink.

13 Responses to Off to a good start. Hopefully.